So this month’s T-SQL Tuesday subject is a shout out and high-five to those people who have inspired or made a contribution to my DBA life.

Well where do I start?  Thinking back on my career there are just so many people that have given me a push here and a nudge there without which I probably wouldn’t be sat here and doing what I’m doing.  There are just too many people to be able to single out anyone in particular so instead I’m going to have a look back through my development and career in technology and tip my hat to those key people and they contributions that they made at key points.

So where better to start than right back at the beginning.

Where It All Started

The first person I’ve got to call out has got to be my Dad.

Take your mind back to the mid 1980s and the moment that my old man walked in through the door with a big box containing some strange electronic contraption.   I watched as he plugged in all the wires, flicked the switch and the Amstrad CPC, in all its 8bit glory sprang into life.

A 7 year old David was fascinated by this magical box of lights, bleeps and lego keyboard.  I loved playing the games, there were classics like Jet Set Willy, Oh Mummy and Golden Axe.  There were frustrations when the you’d be waiting for a game to load only for it to randomly crash with the dreaded ‘Read error b’ or those moments when it’d just decide to chew up a cassette and you’d just hope that it’d still load after you’d spliced the tape back together.

But I wasn’t just playing games, I was intrigued by how the thing actually worked.  I was fascinated by the ‘Type Ins’ that were printed in the monthly Amstrad Action magazine, code listings for games and programs in BASIC that you’d copy out and if you’d manged not to make a typo would actually work. 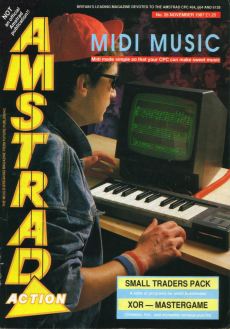 I wanted to know how this mysterious language worked so a spent many Saturday afternoons with BASIC programming manuals, playing around and experimenting.  I was probably around about 8 when I wrote my first computer game, a text adventure called ‘The Gold Box’ and my journey began.

We’ll now need to fast forward 10 years or so to shout out to the next person that nudged me towards where I am now and that’s Dave Lewis, my university lecturer.  By this point I’m well on my way towards a career in technology, I’ve been through college and got my GNVQ in Computing and I’m now at University studying for my degree.  At that moment I’d got my heart set on web development, I loved graphic design, I’d mastered java script and ASP so was all set.

Databases were just these boring things that we put together using MS Access, well that was true until Dave introduced me to my first proper RDBMS, Oracle 8i.  I still don’t know what it was but at some point during one of those lectures, a light bulb went on in my head and I thought to myself, “you know what, this database m’larky is actually pretty cool!”.  From then onwards databases were the way that I wanted to go.

The next person to get a call out is my old boss, Dave Tunbridge.  He was the guy who gave me my first break.  When I was thoroughly fed up of all the “sorry, but we really need someone with more experience” when applying for DBA jobs and just as I was about to give up and go looking for something else, Dave called me up and offered me the job.  I’d landed my first DBA job working for Canterbury Cathedral of all places and I was now well on the road to becoming a DBA.

Dave was also the person who pushed me forwards onto my next step, I was growing a little comfortable but one morning when I arrived at the office, there was a newspaper on my desk with a DBA job at the local university circled.  “You should go for that”, Dave said “that’d suit you down to the ground”.

Even the Negative People Can Have a Positive Influence

The job started out very well, I learned and I moved forward, developing my skills as I went.  I worked there for over 11 years but as I’ve seen repeated a few times, “what use is 11 years experience if those 11 years are just the same year repeated 11 times?”.  And that job was just that, it started well but essentially I was only going to learn so much and truth be told, despite constant promises that things would improve, they never did and I ended up as little more than an overpaid software support analyst.  But after so many years, I’d grown too comfortable so I really do have to tip my hat to the new director of IT (she’ll remain anonymous) who made it such an intolerable place to work that I just had to jump and to be honest, looking back that was probably the best decision I’ve made in a very long time.

The last person I need to call out is @adedba, Adrian Buckman.  It’s his infectious ambition and want to learn that pushes me forward and makes me want to continue developing myself.  I’ve got one eye over my shoulder watching him but even though I have to push myself to stay in front, he’s not far away and gaining ground quickly.